Kinesio Tape, also called Kinesio Tex Tape, is called "Intramuscular Effect Tape", also called "Kinesiology Tape" and "Muscular Energy Effect Tape". The full English name is Kinesio Tape. Developed by Dr. Kase in Japan in 1973, the original design concept was to drain local effusion caused by swelling and local temperature rise caused by swelling.
The biggest difference between the muscle patch and other traditional patches is that it has elasticity, resilience and extensibility, and can provide sufficient stability support under the premise that the limbs are allowed to move in the normal range. Its weight is very light. It is suitable for all ages. In most cases, users will not feel abnormal after correct use. This does not limit the mobility of the joints. Except for sensitive skin allergies or irritation, there are almost no contraindications. It can be maintained after application. 49 --72 hours. 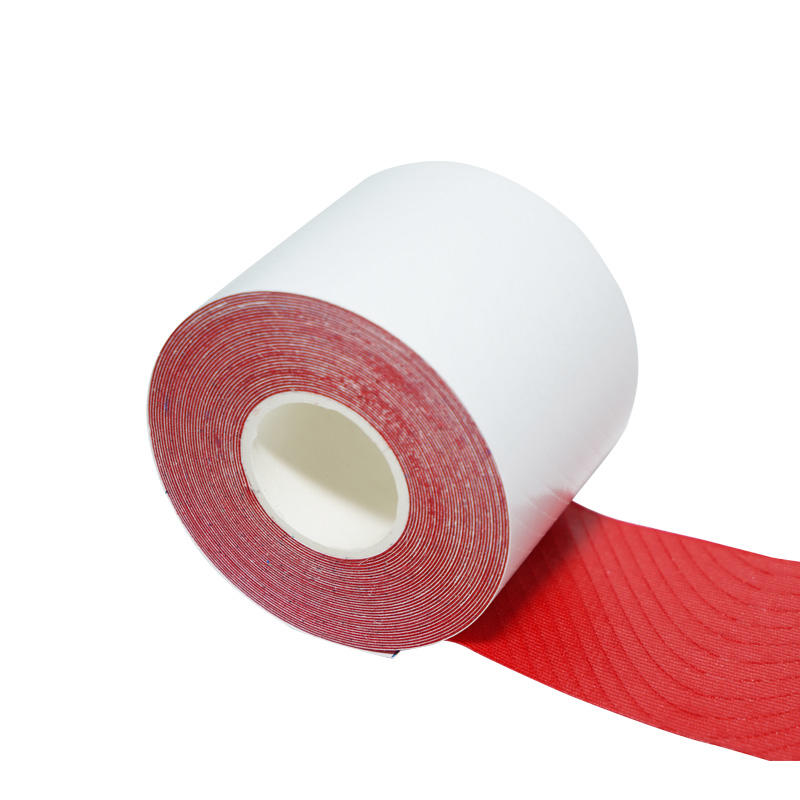 The muscle patch uses a design that can extend the length of the original patch by 40%-60%. It is usually composed of a soft, breathable and elastic cotton cloth combined with a water ripple-like acrylic low-sensitive adhesive that mimics the fingerprint path of a hand. The water ripple technology is the key to the function of the muscle patch to increase the comfort and fit of the contact with the skin. Common terms: Management of muscle strain, swelling and pain. Correct sticking can minimize congestion after injury, such as muscle strain and joint sprain. It can also correct joint mechanics by improving joint muscle function.

Intramuscular effect patch (KINESIO) is mainly developed for the treatment of joint and muscle pain. In terms of the effectiveness of sports patches, the sports patches used by general athletes can only temporarily relieve pain and lack therapeutic effects. Athletes use intramuscular effect patch, old injuries and previously accumulated muscle pain can be improved. If the injury is not healed but have to continue to practice, it can prevent the old injury from becoming more serious and causing injury again.
Intramuscular effect patches are widely used in sports health and protection, and most of the users are athletes. The medical community has also begun to apply patches in the treatment of arthropathy. People who do not exercise frequently but have joint pain can also use intramuscular patch to relieve pain and achieve therapeutic effects.
Intramuscular effect patch is a kind of elastic patch. In recent years, it has gradually received clinical attention in foreign countries. It itself is not medicinal like traditional plasters or medicinal cloths, so it is not easy to have skin allergies or adaptations. Bad situation. And its most important magical effect comes from its own tensile and elastic design. Whether it is the "cloth" on the upper layer of the patch itself or the "glue" on the lower layer on the skin, it is designed in accordance with biomechanics and physiological mechanisms. , So the quality of it has a great influence on the effect of the treatment. In addition to the patch itself, the most important factor that determines the therapeutic effect of the patch is determined by the experience and skills of the therapist. The same roll of patch, even if there is a sample of the patch, looks similar in appearance, but for The therapeutic effect may vary greatly, not to mention the "design" and "fine-tuning" of the application according to the different symptoms of different patients. The therapist department needs to consider the overall treatment concepts and techniques of subcutaneous fascia tissue, muscle tissue, joints, blood and lymphatic circulation, nerve tissue, etc., in order to exert the magical therapeutic effect of the patch.
This kind of patch is mostly used on athletes, because once they have sprained joints or muscle strains, they have to exercise and can only be taped. This patch can also be used for non-athletes who experience muscle soreness and strain.
PREV：Several dressing methods for bandagesNEXT：Bandage Technique